270 is a game of electoral strategy and the goal is simple —
to elect the president of the United States against one to five candidates
by having 270 or more electoral votes on Election Day.

IT IS A GAME OF STRATEGY.
There is no element of chance in the game —
winning or losing is up to you.

For each move, players receive $250,000 each campaign day plus any other state or national group funds they have been awarded and can distribute those funds across the 50 states or to gain support from national interest groups. Money earned from state groups can only be spent in states that are part of that group.  Candidates can spend all their money in a turn or carry over unspent funds to the next turn.

All players plan their move at the same time and then all moves are revealed at the same time as players advance in the states until they have reached the conditions for a ballot. Once a ballot is held, if no candidates have 270 votes, the lowest candidate is eliminated, and play continues until the next until a ballot. There can be a tie, and in that case, the game goes to the House of Representatives to vote as state delegations with one vote per state and a winner may be declared based on the current political makeup of the country.

TO WIN THE GAME, PLAYERS SHOULD

The game can be played by 1-5 players and a typical game takes around 60 minutes: 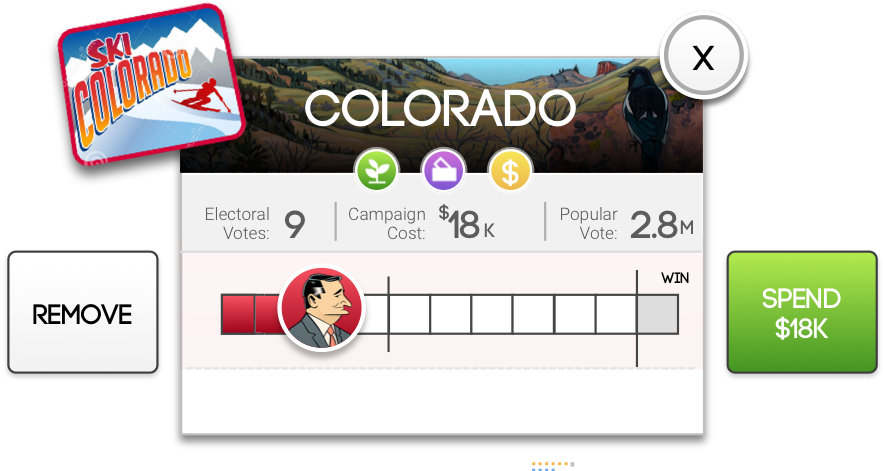 The constitution of the United States provides that the president shall be elected by the electoral college based on the votes of electors transmitted to the President of the Senate. Each state has a number of electoral votes based on the number of representatives to the House of Representatives plus its two Senators. In 1960, DC was also awarded 3 electoral votes despite it having no voting Represenatives to the House or the Senate.

In 270, players battle to win the electoral votes of each state by allocating funds to move up the rungs of state campaign leadership. The player who gets to the top rung wins the state permanently, as opposed to be leading in the state. When a ballot is called, electoral votes are awarded to each candidate based on which states the candidate is leading in or has secured permanently. Get 270 or more and you win. 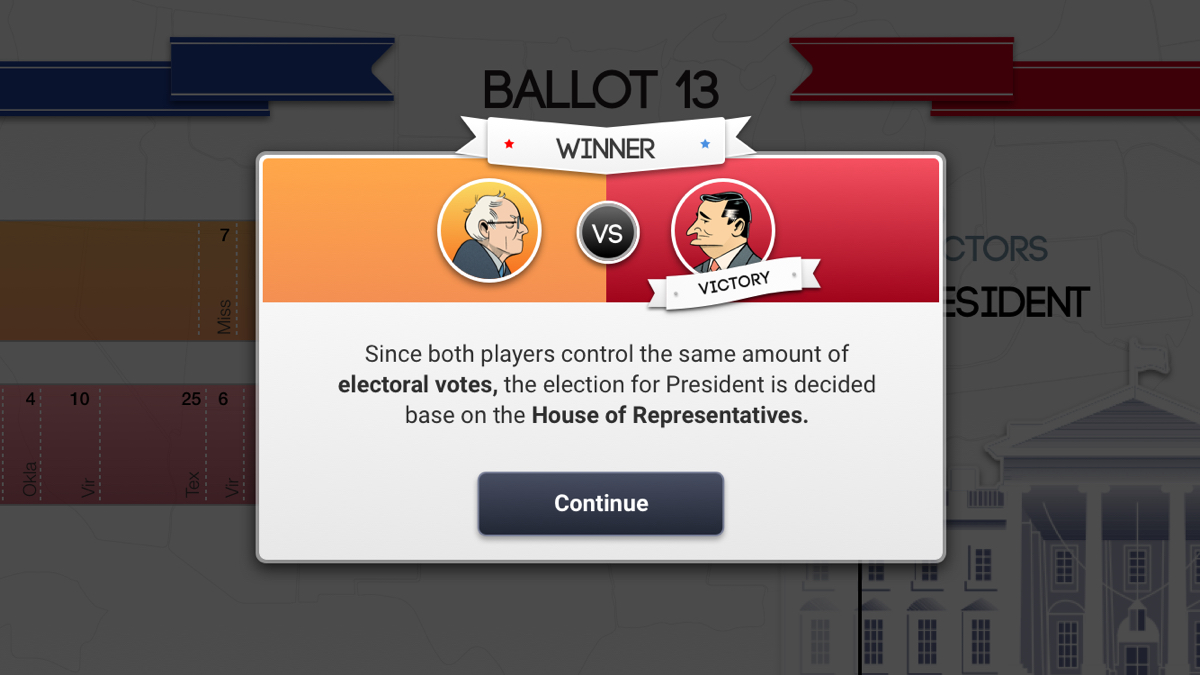 Right now, in 2018, Republicans control more state delegations and so in the event of a tie, a Republican would win. If there are two Republicans in the game, they tie. If no Republic

Each state has four important qualities —

The popular vote, as in the electoral college, plays no role in the game, other than to project whether the candidate might have won or lost it.

But the other three variables are critical in planning your campaign strategy.

Here is a sample state and note it’s qualities: 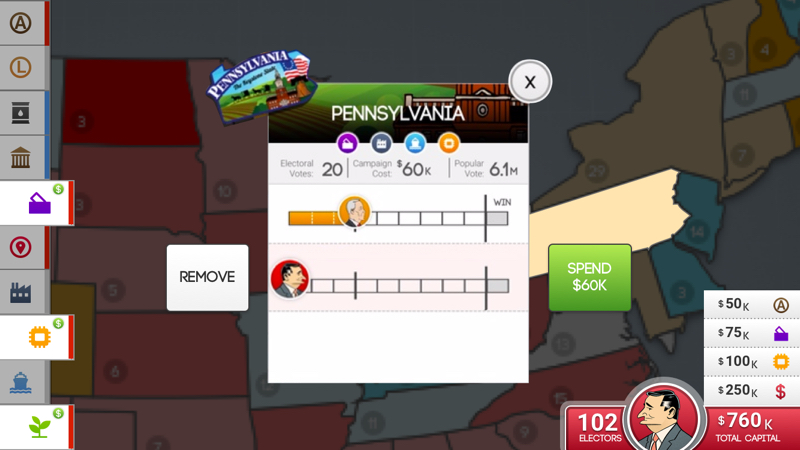 Note that like all states there are 10 rungs of campaigning.  There are 9 electoral votes at skate here 7and each rung costs $18,000.  There are 2.8 million likely voters in the state. Under the name of the state, note the symbols for the state groups that Colorado is a member of — Swing States, Oil and Gas and Latino voting blocs.

The cost of campaigning is based on actual relative costs of media in each state and the group participation based on a statistical review of the voting and economic statistics related to the state. 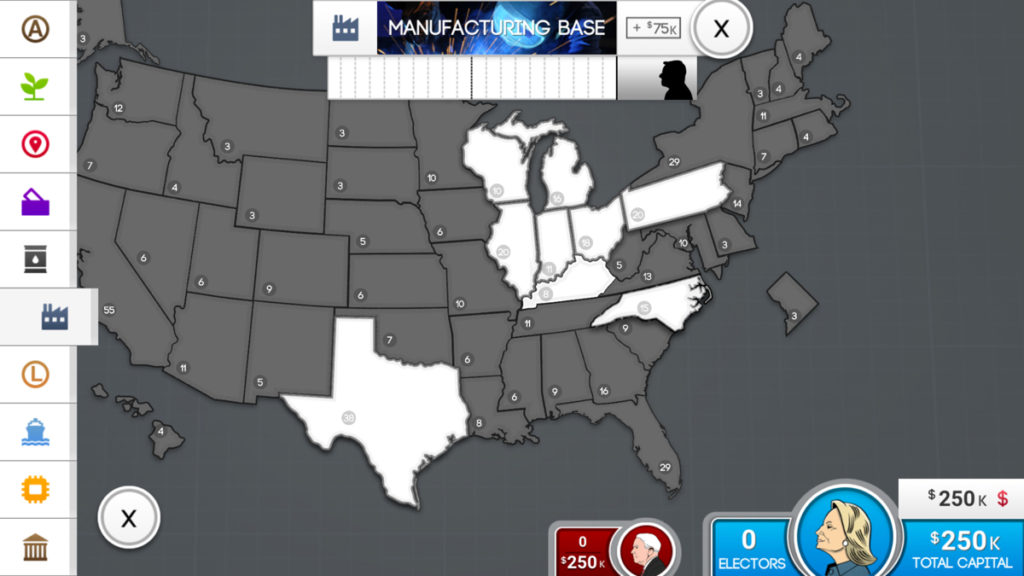 To gain strategic advantage, players get bandwagon support from specific state groups. The clock for the game is set at 2016, so the groups that wield significant electoral power and fund-raising clout at that time are represented. Once a candidate leads in a majority of electoral votes represented by the states in the group, the candidate receives the indicated additional bonus contributions each day as long as the candidate leads among that star group.

The tally for support from each group is based on the electoral votes in each state in each group and support from a state is counted only when candidates go past the first two rungs within state.

Importantly, bonuses for state groups can only be spent within the states of the group.

In later versions of the game, players will be able to reset the clock to different periods of American History or projections of the future and the clock will have the electoral college and groups appropriate to that time. 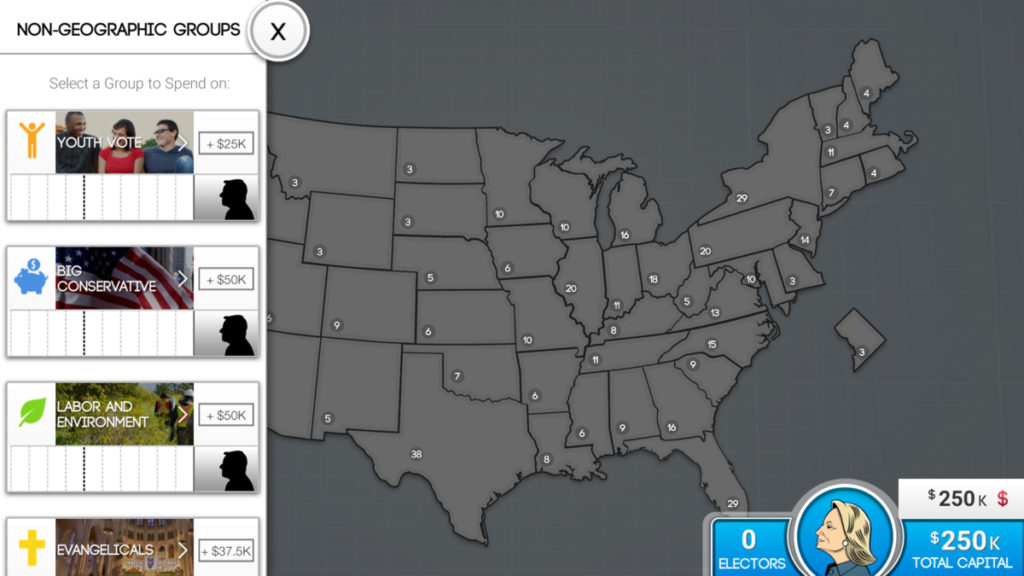 The cost of each rung to win over a national group is priced at one half the turn benefit. So the rungs of the Youth Vote will be 25k and there are 10 rungs.  The group will not award a bonus until a candidate has reached the 5th rung. Winning national groups is expensive but they offer big benefits if secured because their funds can be spent nationwide.

The actual bonus you will receive from state and national groups will be based on candidate personalities and the deficits and bonus variance embedded in the candidate profile.

You can play 270 as one of many potential actual and fantasy candidates. You can select your party and your candidate in the opening of the game. Many of the candidates from 2016 are offered free so that everyone everywhere can play 270. In addition, the 270 shop offers a growing list of candidates for sale you can add to your personal account to make play more varied and fun.

Candidates have personalities — strengths and weaknesses that affect how you should strategically play the game. Based on an assessment of their characteristics, each character has a profile that includes bonuses and penalties related to the state and national groups.  So, a candidate of Youth who captures that interest group might get 50 per cent more bonus funds for capturing the Youth Group.

You should understand the personalities of your candidate as well as your opponents to maximize your strategic play. We deliberately don’t ban a candidate like Hillary Clinton from getting the South but we make it less valuable for her to capture those states so that it would be a counter productive to deploy that as a strategy.

An official ballot of the states is taken one turn after the following conditions are met: 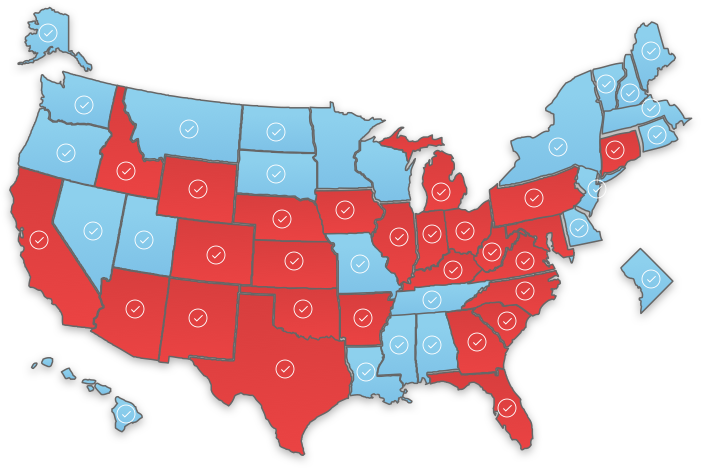 During a Ballot, the player with 270 electoral votes is elected president! If no president can be elected, the player with the least number of votes is removed from the game, with all their spend being removed, allowing the remaining players a chance to spend on those groups and states in the next turn.

HOW THE TIMER WORKS

Once the game is setup, the timer won’t start counting until all players have joined (the game has started). At this point, the timer will begin counting down.

The timer is then reset and will automatically begin again during the turn summary screen.

If a player misses 3 turns/no activity, then that player forfeits the game.

If a player leaves early from the game for any reason, but still wins that stat will not count in order to prevent win trading and abusing of TwoSeventy’s system to inflate player’s stats.

That’s all.
Enjoy the game!